7 of the World’s Best Places to Learn to Surf

I don’t think I’ve ever met a person who tried surfing and didn’t like it. The buzz you get when you catch your first wave lying down, never mind standing up and riding it, is totally addictive.

When it comes to the best places to learn to surf, not everywhere is ideal. If you’re just starting out, you’ll want to learn at a beach break—better to bounce off sand when you fall than a jagged reef—with gently spilling waves, and no strong currents or rips.

Having spent the last two years surfing around the world, I can personally vouch for each of the following spots as perfect destinations for absolute beginners. Even if you’re not a complete beginner, each location also has other breaks within a short distance where you can progress onto green waves, and then challenge yourself on more advanced waves. 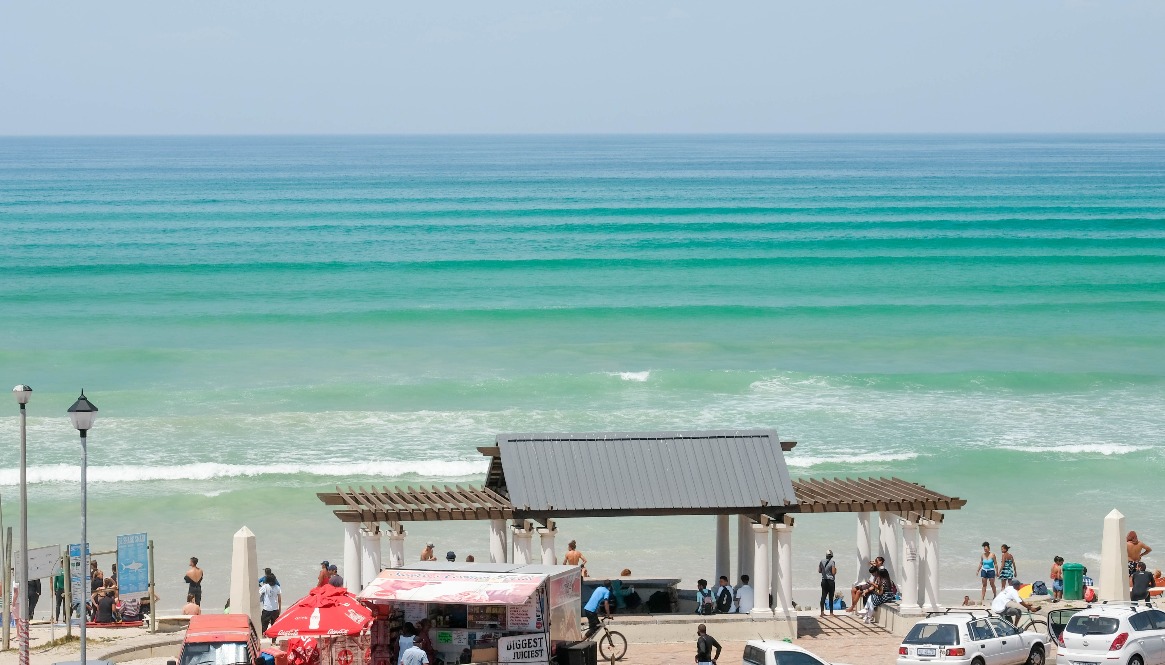 Located about half an hour outside of the centre of Cape Town, Muizenberg is one of the best places in the world for learning to surf. Surfer’s Corner at the top end of the beach is where most of the action happens.

The water can sometimes be crowded, especially on weekends, but the beach is big and there are plenty of waves breaking to spread everyone out. Once you’ve mastered the white water, head out the back for some super fun green waves.

The strip lining the sea front has plenty of surf shops offering board rental and lessons, as well as a good selection of cafes and restaurants.

Ticket to Ride run a 12 day surf camp in Cape Town which includes daily surf coaching, plus you’ll get to explore the best of the area, from Table Mountain to wine tasting in the Cape winelands. If you have more time, check out their 10 week South Africa Surf Adventure.

Progress to: Long Beach in Kommetjie

Surf season in South Africa: Beginners should get waves all year round but the most consistent time for swell runs from April to August. 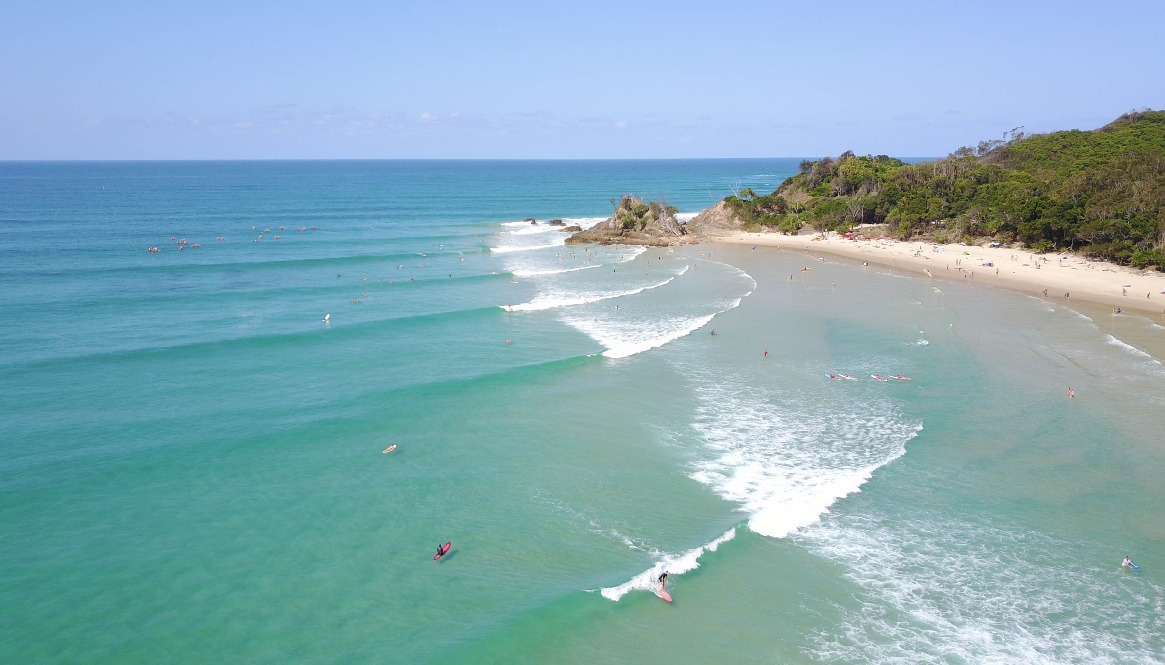 Byron Bay is one of the world’s original surf towns. Laid back, hippy vibes, beautiful people and beach life perfectly sum up this small town on Australia’s east coast. Surfing is a way of life here and beginners will have everything they need, from professional surf schools to perfect waves.

Rent a board from one of the many surf shops in town and head to Main Beach for the best beginner waves. The Pass is also perfect for learning, but being one of the most popular spots in town means that the crowds can make it a bit hair raising.

If you arrange a lesson with one of the local surf schools, they will drive you to a spot with the best conditions on the day in terms of waves, wind, and crowds.

Food and accommodation are more on par with Western prices so it’s not ideal if budget is your number one priority. Check out Byron Bay YHA, it’s one of the nicest hostels I’ve ever stayed in anywhere in the world.

Water temperature: Don’t be fooled by anyone who tells you the water is warm all year round. In winter you’ll need a 3/2 wetsuit, summer is bikini and boardies, and you may want to wear a spring suit in between.

Surf season on the east coast of Australia: Beginners should find waves all year round, but the wind direction is more liable to make the waves messy between September and November. The main swells hit between April and September. 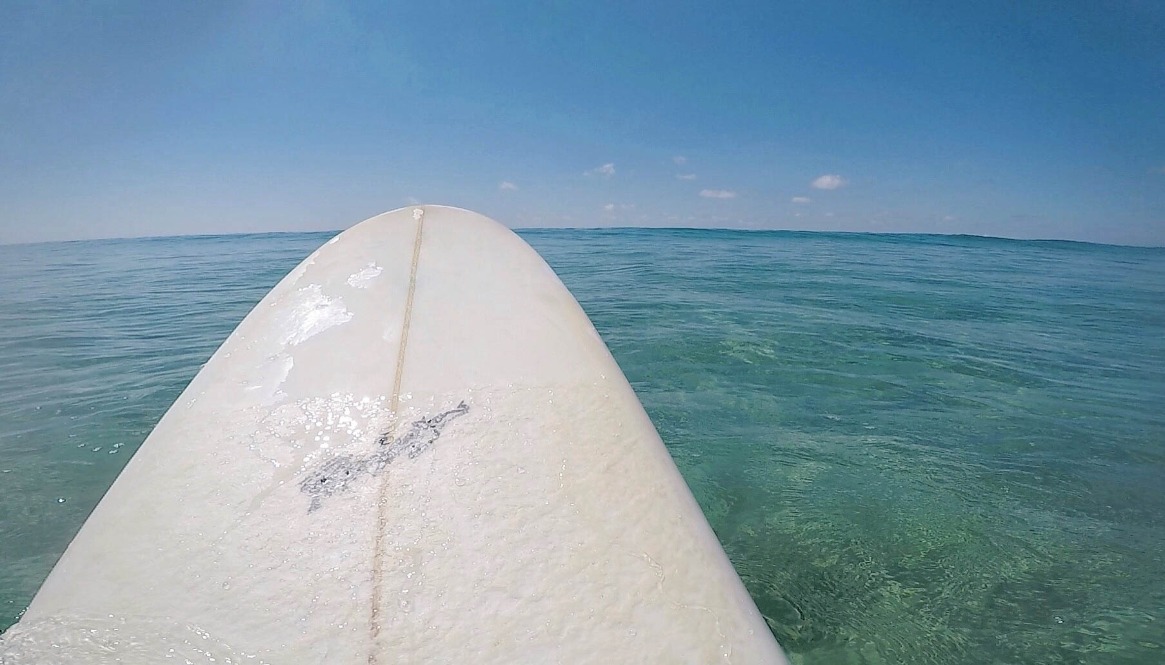 If the combination of warm, crystal clear water and uncrowded waves sounds appealing, book yourself a flight to Mozambique. Still under the radar compared to most surf destinations, Tofo has gentle peeling waves perfect for complete beginners, right through to rippable walls suited to more advanced surfers.

Usually, the best place for catching your first waves is right at the top end of the beach in front of Casa Barry. There is a surf shop on the beachfront at the other end of the beach where you can rent boards and arrange surf lessons with good instructors.

A bit more off the beaten track than the other destinations on this list, Tofo isn’t the best place for novice travellers looking to do a DIY surf trip. Africa can be quite intense and getting around can be a mission, but once you’re at the beach and settled, it’s amazing.

Water temperature: Warm – although you may want a spring suit as the wind can be cold

Progress to: The Point at Tofinho

Surf season in Mozambique: April to September, although the swell and wind can be a little bit fickle. 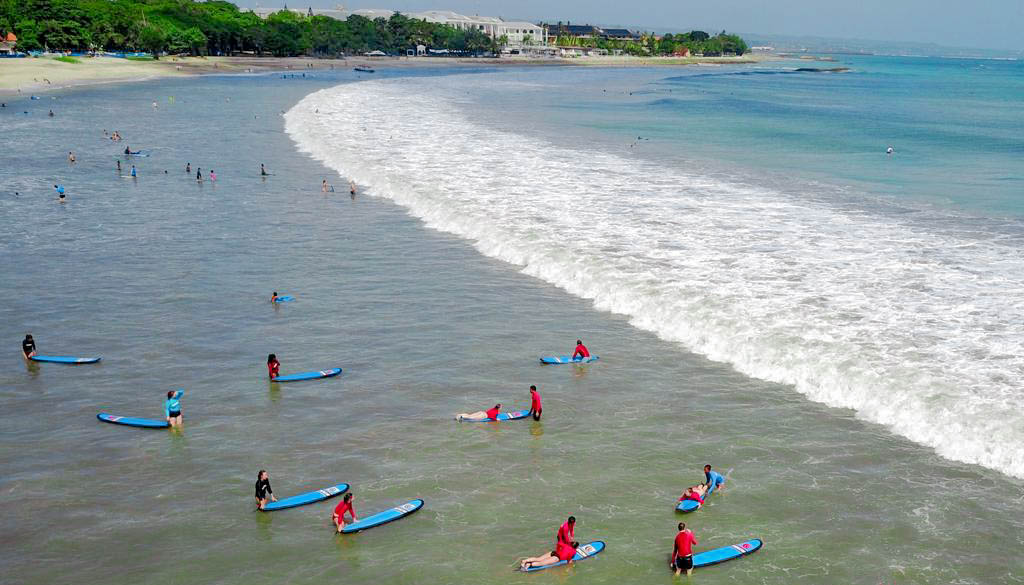 Jam-packed full of stalls selling knock-off Gucci T-shirts and souvenirs, bars, restaurants, street hawkers, and traffic, you’d be forgiven for wanting to avoid Kuta. But what you’d be missing out on, is the best waves on the island for learning to surf.

Kuta beach is lined with board rental stands and instructors who will give you an hour lesson then hook you up with a Bintang on the beach afterwards. The quality of tuition can vary, so if you’re super serious, search out an accredited instructor.

The water can get crowded, but again, the beach is huge which spreads out the masses. Once you’re ready to move onto green waves, the same beach will give you plenty to work with unless the swell is big, in which case just grab a beer and enjoy the show.

Food and accommodation is relatively cheap in Bali so it makes a great choice for a budget warm water surf trip.

Water temperature: Warm – bikinis and boardies all year round

Surf season in Bali: The main surf season runs from April to October. Beginners may get waves outside of this but the wind can be an issue. 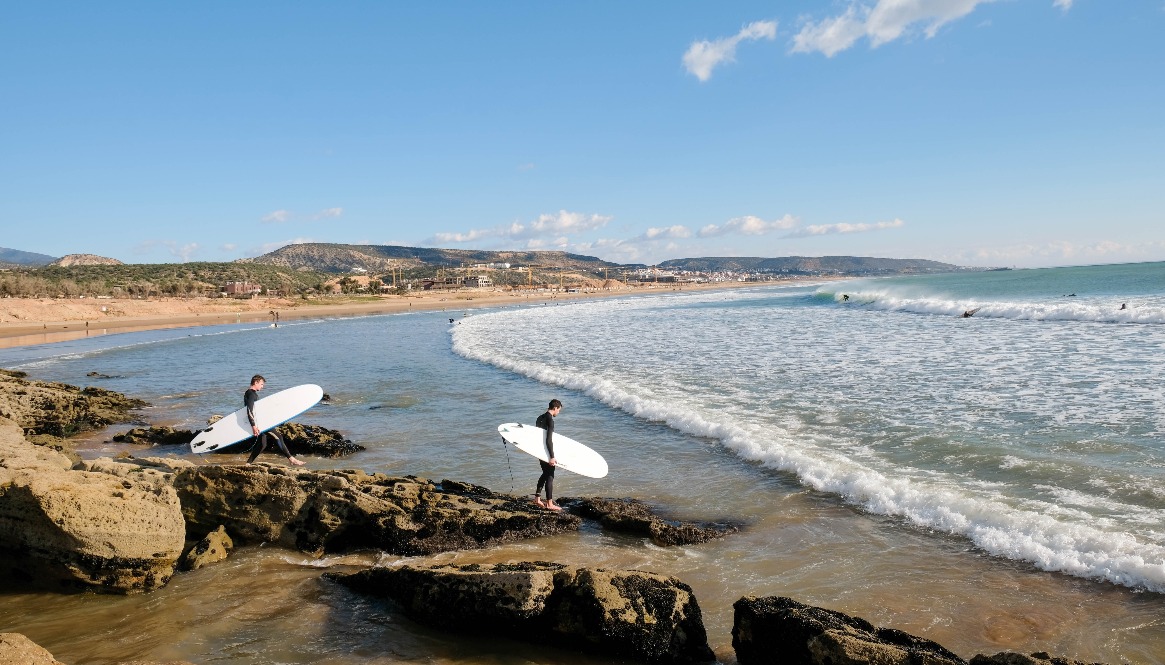 Home to mint tea, tagine, and pumping surf, the busy fishing village of Taghazout is also an epic place for learning to surf. The large main beach is the best place for absolute beginners to catch their first waves, with loads of options within a short radius to progress after that.

Flights from Europe to Agadir are surprisingly cheap, plus the cost of food and accommodation in Morocco is low, so it’s very possible to arrange a sunny surf trip without breaking the bank. Boards can be hired and lessons arranged at one of the surf shops in town, plus many hostels also have boards for hire.

If you’d rather have everything done for you, there are several well established surf camps in the area.

Water temperature:  Cool – in winter you’ll need a 3/2 wetsuit, but bikini and boardies are possible in summer. In April, May and September you might be more comfortable in a spring suit.

Progress to: Panoramas or Hash Point

Surf season in Morocco: Beginners will get suitable waves all year round, but the main surf season is from around late September until April. 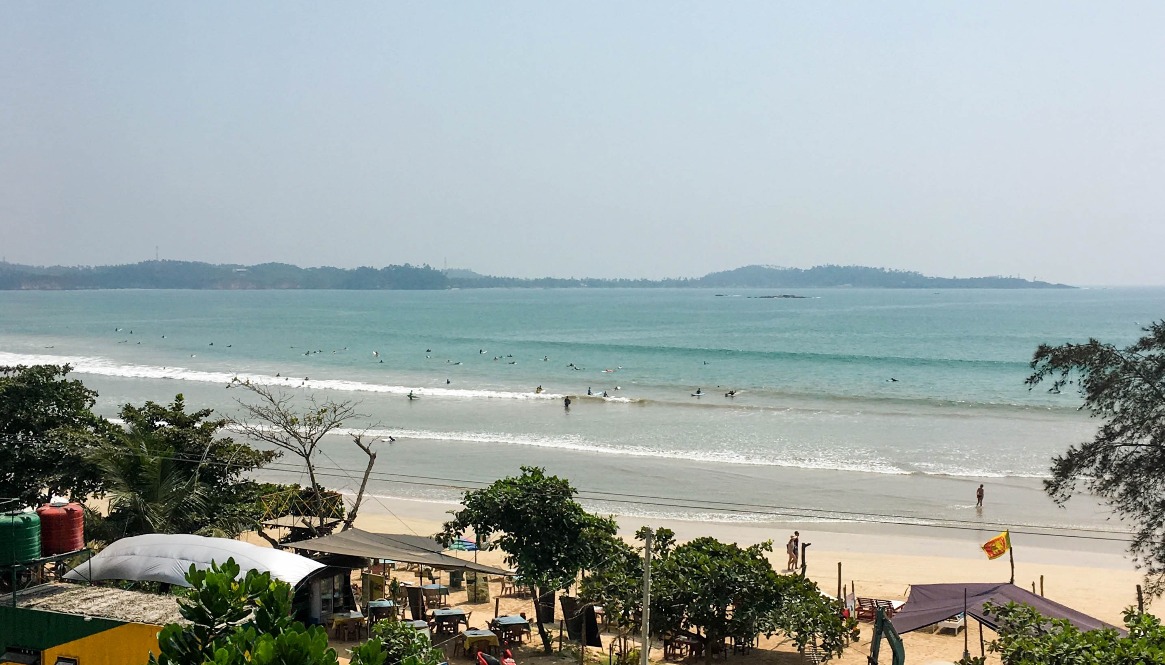 Surfing in Sri Lanka is a great option if you’re looking for somewhere that’s tropical, but light on the budget. The bustling fishing village of Weligama has a long, wide sandy beach with plenty of waves perfect for beginners. The water can get crowded but most people are learning so it’s pretty easy going. Get there before 8am if you want to avoid the crowds.

The best place to surf is usually in front of the Marriott hotel and you can rent boards and get lessons from one of the many surf schools that line the beach.

There is a range of accommodation options in Weligama, from hostels to big hotels, plus loads of places to eat and drink. A budget favourite is Hangtime Hostel, right on the sea front.

Water temperature: Warm – bikinis and boardies all year round

Progress to: Plantations in neighbouring Midigama

Surf season in Sri Lanka: The main surf season on the southwest coast of Sri Lanka runs from the end of October to early April. Outside of this period you may get waves, but the wind will likely be messing them up. 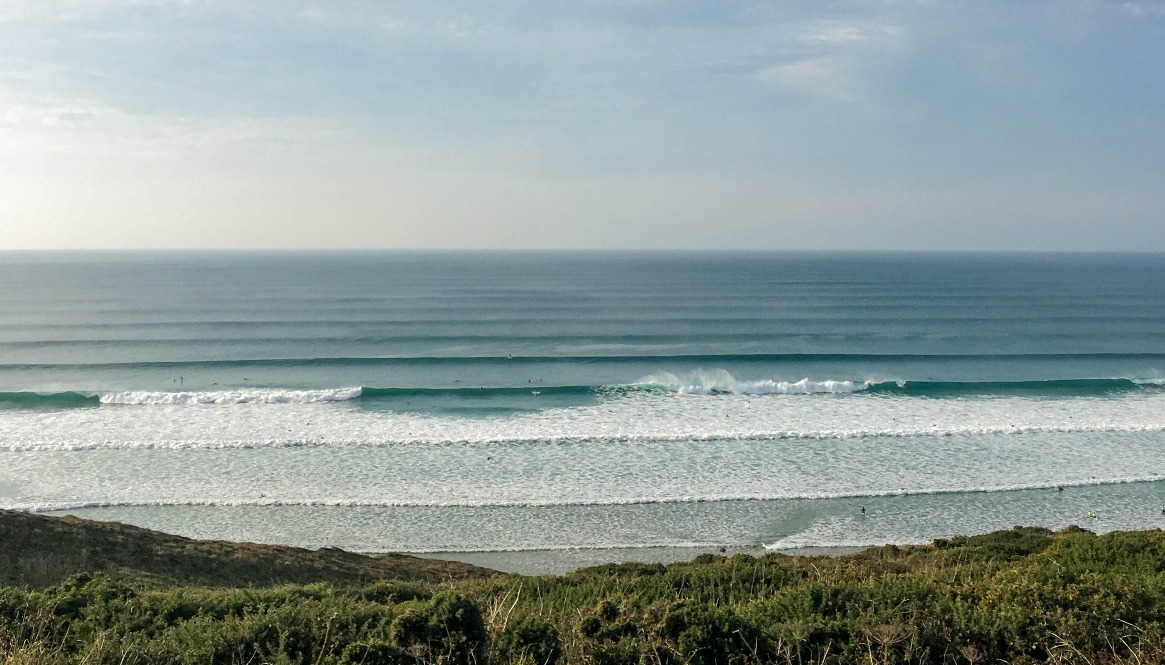 If you don’t mind a bit of cold water, the UK is actually a great place to learn to surf. Cornwall picks up the most consistent swell and Newquay in particular has long been the home of British surfing. Fistral Beach is one of the most popular spots for beginners, but this does also mean that it can be crowded, especially during the summer months. Stunning Watergate Bay is just a short drive away and is another good option for learning.

Once you’ve mastered the white wash, head out the back at either beach for some super fun green waves on a small swell.

There is no shortage of surf schools to choose from in Newquay and Watergate Bay, plus surf shops where you can rent boards and wetsuits if you’d rather go it alone.

Water temperature: Cold – you’ll need a 3/2 wetsuit from about May to October and a 5/4 from November to April.

Surf season in Cornwall: Beginners should get something all year round although summer does see flat spells. The best, and most consistent, time of year for surf in the UK is autumn and winter.

Where do you think the best places to learn to surf are?

Have you tried learning somewhere that’s not on this list and loved it? Let us know in the comments, and if you know anyone who might be interested in the best places to learn to surf (tropical surf trip anyone?), share the love using the social buttons below 🙂

Full disclosure: Some of the products in this post may contain affiliate links. Shopping via these links means that you can buy the product at no extra cost to you, but I receive a small commission which goes towards the running costs of this site. Be assured that I only recommend products I use myself and trust. Your support is very much appreciated.

Surfing the Solomon Islands – Everything you need to know